Back to all events
1-2pm

Hear about the exciting new study that supports Hematopoietic Cell Kinase (HCK) as a new therapeutic to boost treatment response in pancreatic cancer. This groundbreaking research has the potential to create new treatment options for pancreatic cancer patients, lead to better survival rates, and improved quality of life.

Pancreatic cancer is an aggressive disease with a five-year survival rate of less than 10 per cent. Most patients show poor response to existing drugs or do not respond at all. The development of new treatments has been slow.

HCK is a protein that is found in a type of immune cell known as a macrophage. The research team in the Cancer and Inflammation Program at the Olivia Newton-John Cancer Research Institute (ONJCRI) has shown macrophages that have more HCK are better at supporting tumour growth. However, when mice are given a drug that stops HCK activity in macrophages, the cells lose their ability to promote tumour growth. Preclinical data demonstrates that cancer drugs work much better when they are used in combination with drugs that target HCK, suggesting that inhibiting HCK in combination therapies may improve treatment outcomes for patients across a broad range of solid malignancies. 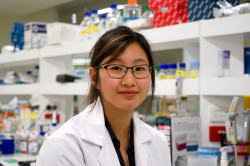 Dr Ashleigh Poh is an early-career biomedical researcher in the Cancer and Inflammation Program at the Olivia Newton-John Cancer Research Institute. Her research was the first to identify a tumour-promoting role for the myeloid-specific kinase HCK in gastrointestinal cancers by enhancing the polarisation of immunosuppressive macrophages. These findings have leveraged major industry-related partnerships with the Cancer Therapeutics CRC (CTx) and the Australian Government-supported National Drug Discovery Centre (NDDC) to develop small molecule HCK inhibitors for clinical use. Dr Poh has continued to build her independence by securing independent funding as Principal Investigator/CIA on numerous HCK focused research grants, including a prestigious NHMRC Peter Doherty Early Career Fellowship and 2021 PanKind Collaborative Research Grant.

Consumers as active partners in research: workshop for researchers